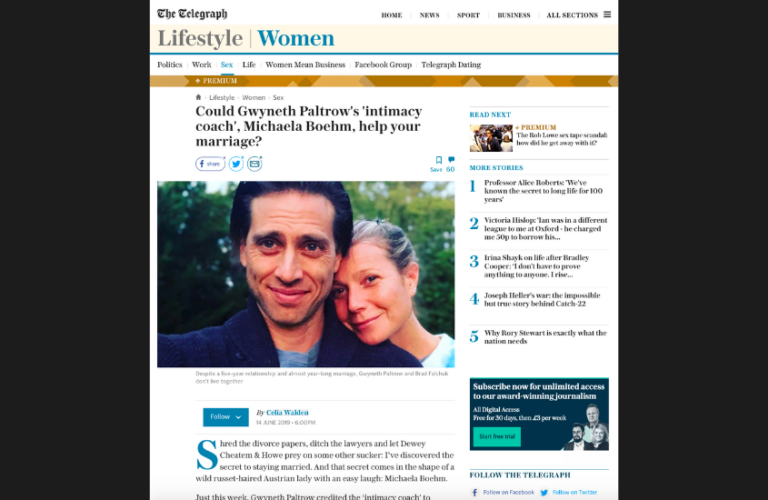 Shred the divorce papers, ditch the lawyers and let Dewey Cheatem & Howe prey on some other sucker: I’ve discovered the secret to staying married. And that secret comes in the shape of a wild russet-haired Austrian lady with an easy laugh: Michaela Boehm.

Just this week, Gwyneth Paltrow credited the ‘intimacy coach’ to Hollywood A-listers with helping keep her marriage “fresh”. Which prompted my own easy laugh – until I spent an hour with the 51-year-old sex and relationship guru in the “she shed” she’s built on her organic farm in Ojai, California, and realised that just like the personal trainers and nutritionists we initially dismissed as celebrity pampering, an ‘intimacy coach’ is probably what we Brits need most. If only we knew what the “gilded explorations” promised on Boehm’s website actually involved.

“What I do isn’t the same as being a relationship counselor,” she explains, and although the Austrian accent makes her sound severe and wise, her expression is warm and open. To be crystal clear, she’s “not a sex coach”, either. “I don’t watch people have sex or tell them what to do. My work is about looking at a relationship and helping you to invest time in making it work – which is so crucial. Because nobody would hand you a million dollars without first giving you some kind of financial education, would they? And a relationship is worth far more than that.”

Boehm works with everyone from the biggest actors and entertainers in the world (“one client was so famous I had to be taken to them in a car under a blanket,” she laughs) to “those who potter in off the street” to attend the £400-plus workshops she gives across America, Europe and Australia.
Nevertheless, she feels her “specific skill set lends itself to working for people who are very high performance.” And let’s face it, they need her.  What is it that makes it so hard for the rich and famous to stay happy and married – let alone both?

“Well the two sectors contain people who are extremely high performing in many areas of their lives,” she tells me. “So that when they have ‘leaks’ as I call them – and I mean energy or compassion leaks – they are often in the relationship and sex areas.”

Famous men are having a particularly difficult time of it right now, she believes. “Because it’s so dangerous for them – and they can be preyed upon. Nobody talks about that. Everybody talks about MeToo, which is valid and important, but there is a whole other dark side where men are getting trapped and blackmailed. Gossip alone can be very damaging.”

Accomplished and powerful ‘have it all’ women like Paltrow don’t have it easy either. “They can’t date quietly”, let alone “deal with heartbreak and insecurities” – and she is in awe of her client’s openness. “Gwyneth has exposed herself to some pretty brutal and harsh criticism but people are now understanding what a role model she is. Her commitment to love in the greater picture, and the wellbeing of her children and everyone involved, including the exes of the exes, isn’t something to sneer about – it’s really admirable.”

This is true. And perhaps now that people have seen the important point behind the “conscious uncoupling” jargon, they may follow the actress’s lead on relationships? “I hope so. Because someone like her can make an impact by making a statement that is out of the ordinary. And just as she showed that there is a better way to divorce, perhaps we can now show people that there is another way to have relationships.”

Whether you’re an A-lister or not, the rules are the same once lessons begin. “There is no nudity and no sexual touching whatsoever,” explains Boehm, who was trained in the Hindu principles of Tantra and worked as a relationship counselor when she first moved to the US in 1994, before honing her coaching skills to the more ‘intimate’ area she is now famous for.

“No kissing either. Because the skills I want people to learn are about come before that. Can you sit there with your husband or boyfriend and make eye contact with them without giggling or looking away? Can you actually feel your heart opening and closing as you look at your partner? It’s about generosity of the heart, not wallet. And most importantly, it’s about the ability to provide praise and acknowledgement.”

So far, so un-kooky. But what caught everyone’s attention in Paltrow’s recent interview were the unusual living arrangements – sealed and approved by Boehm – which she and director husband, Brad Falchuk enjoy. Despite a five-year relationship and almost year-long marriage, the pair don’t live together, choosing instead to spend a maximum of four nights a week with each other at Paltrow’s LA home. Is this all part of the “polarity” Boehm claims is vital in a marriage?

So the less ‘familiar’ we are with one another, the more that polarity can thrive? “Absolutely. I’m a big advocate of getting as much space as you can,” she nods. “Now, of course, it’s a one percentile-privilege to live in separate houses – which a lot of happily married people I work with do – but even if it’s just a ‘man cave’ or a ‘she shed’ – do it.” Smiling, she informs me that her husband of 17 years has his own separate property on the farm.

“People should also vacation separately if they can,” she adds, conceding, again, that this is not always possible given financial and familial obligations. “But regardless of any of that, every couple should consider taking a few of my very easy tips. For one: stop the random touching all the time. No putting out your face for a kiss without even thinking about it or patting your partner’s arm. If you sleep together and eat together and then peck each other on the cheek all the time, your nervous system is going to grow weary of that. And never put sex on a ‘to do list’ – even a mental one.
Women should never override their body’s signals because that will only lead to resentment.” In her 2018 book The Wild Woman’s Way: Unlock Your Full Potential for Pleasure, Power, and Fulfillment, Boehm talks a lot about the “fairytale” that has made relationships so much harder for women. “There used to be only a few things that women had to be good at, but now we essentially have to be a CEO in the boardroom, a stripper in the bedroom, Martha Stewart around the house, supermum with the kids, as well as doing yoga, having a spiritual life, an interesting group of friends and looking good on Instagram.”

Bringing feminism into a partnership is just another ‘fairytale’ that belies couple’s natural predispositions, she believes. ‘I do over 60 events a year, I am super busy and consider myself ultra-liberated, but I [still] love domestic things like cooking.” Having an independent life and friends of your own is crucial, says Boehm. “As is date-night discipline.”

Having an independent life and friends of your own is crucial, says Boehm, ‘as is date-night discipline’

Here I can’t hold back a groan. The concept of date nights has always made me shudder, I explain; like trying on an old dress or going back to the same place you holidayed as a new couple, it only tends to prompt unfavourable comparisons. Not to mention the nauseating expression itself.

“Then call it something else. But you have to carve out time for one another. And you should make sure you always meet at the restaurant or movie theatre in order to get some ‘friction’, having taken the time to get your hair done and maybe fit in a shave of some kind,” she chuckles. “Put all the focus on that engagement. And once there do not talk business, kids or bills. There’s nothing sexy about saying: ‘Who’s picking up little Poppy?’ All that stuff is the death of hot sex.”

On that subject, what does she think of millennials, who have the least amount of sex of any generation in history and are supposedly anti-marriage too? “Well, how they’ll be able to even sit next to one another without texting is more problematic to me than any relationship beyond that,” she sighs.

Boehm needs to go and hop on a plane to New York, where a client awaits. But I forgot to ask one crucial thing: her rules on technology. “Oh that’s simple: anytime you want to engage with your partner you should not have a device on you at all.” My husband always has his phone on the table during supper, I tell her – my voice as shrill and plaintive as the school tell-tale.

Michaela featured in the The London Times

Michaela featured in YOU Magazine – her advice for *your* life