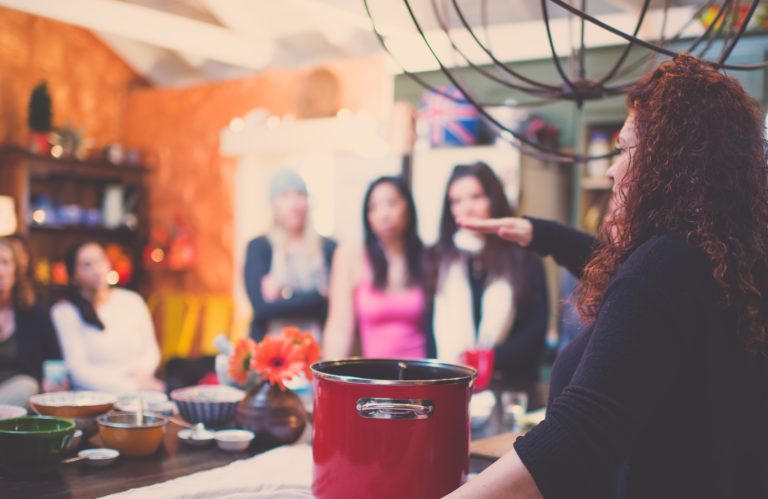 We just finished our weekend of Wild Woman’s Way workshops here in Ojai around ‘Devotion and Sacred Movement’ and ‘Food and Ritual’. The smells of the spices and brews still hang in the air and the studio still has the charged atmosphere that deep, embodied practice always leaves.

While I prepared for the weekend my mind was drawn back again and again to my early tantric training as a young woman in Europe. It was there that I first learned how to make Chai. I realized that both my mother and my Kashmiri teacher loved to use food to nourish and entertain guests and friends alike.

In the first few years with my teacher she instructed me through cooking, chalk art, sweeping, and other ‘household tasks’ to teach me focus, discipline, and devotion. Through these everyday activities she drew my attention to the thread of the sacred that runs through even these simple, ordinary things years before she instruct me through devotional rituals, sacred movement, and the more esoteric and sexual yogas of the lineage.

One of my first real tasks in those days was the preparation of Chai (I’ve included the recipe below!). In her busy house there was always an urn of this sweet, milky beverage available and both visitors and family alike would drink endless cups throughout the day.

Her kitchen cupboards held large glass containers of spices and herbs and she proceeded to empty one spice after the other into small bowls and asked me to smell them. She had me taste each one as she told me their use and application.

Then she proceeded to heat a pot of water and threw some of the ingredients in to steep without measuring or weighing. After about 10 minutes she asked me to taste the brew. Could I detect which of the spices were in there? Did it taste like the beverage she served? What was missing? What was too much?

She repeated this over several different pots and spice combinations over and over until, as the weeks went by, I came to know the smell and taste of each spice and could make the Chai by instinct without the need for measuring the ingredients.

This kind of experiential teaching was typical of her. She seldom explained any theories or principles, and instead would have me perform tasks until the deeper lessons became clear.

Many years later, when I had already started teaching myself, I realized that this way of training allowed my body to acquire the knowledge deep in my bones. I often struggled to understand, but when I finally mastered the skill it was truly mine and not an empty imitation.

Enclosed here below is the Chai recipe I use myself, with a few variations to play with. Try adding different spices to the base recipe and taste the subtle differences. Allow your body to react to the spices and feel which combination is most pleasing to you. You’ll notice that different days call for different combinations and you will acquire sensitivity and distinctions around the ingredients very quickly.

Other spices to experiment with:
1-2 pieces star anise
1 spoon of fennel seeds
1 spoon of coriander seeds

In a small saucepan, combine the water, cardamom, cloves, pepper, ginger, and cinnamon stick. Bring the mixture to a boil then lower the heat and simmer for a few minutes until the mixture is fragrant. Add the tea bag and simmer for another minute then turn off the heat and let steep for 2 minutes. Strain through a fine sieve into a cup. Discard the leaves and spices. Add sweetener and milk, to taste. Enjoy!